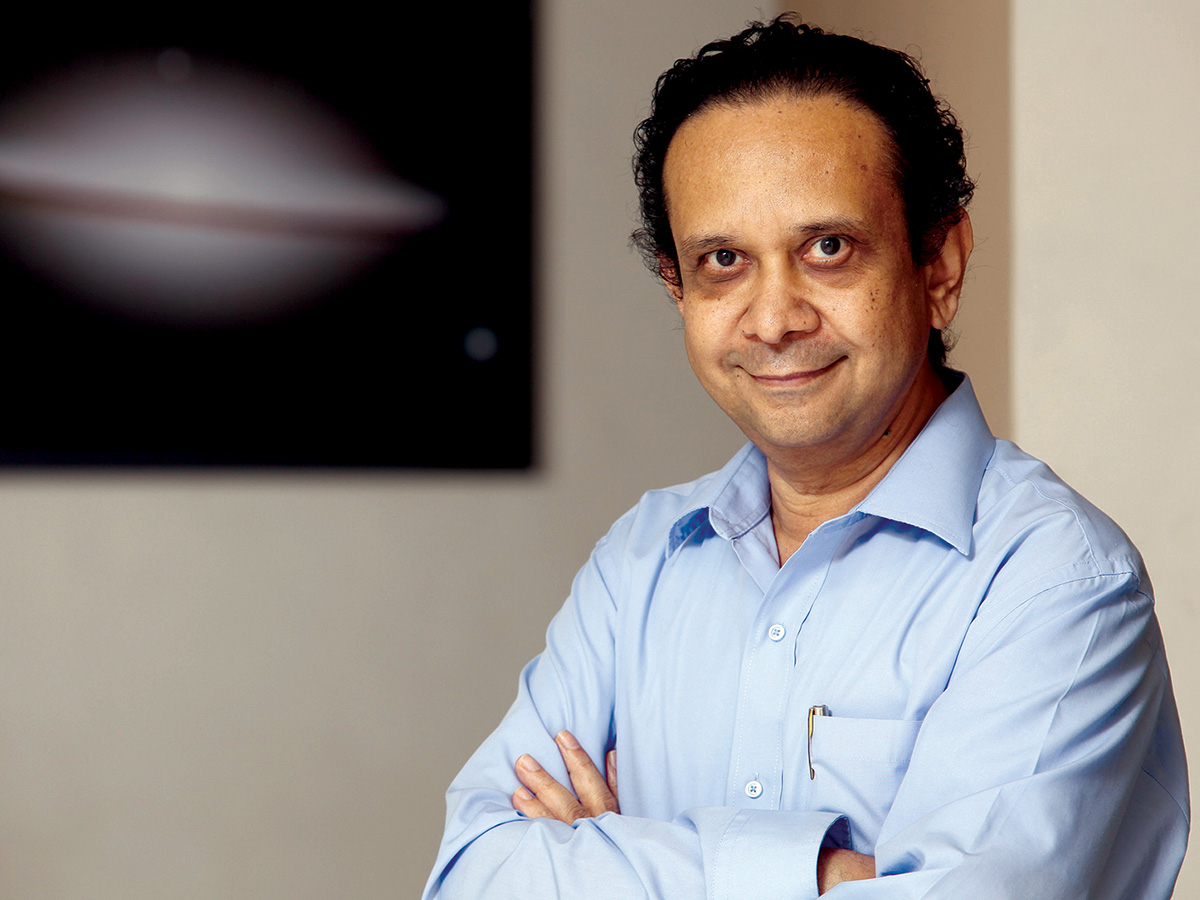 The Infosys Prize in Physical Sciences goes to Professor Thanu Padmanabhan in recognition of his contribution to a deeper understanding of Einstein’s Theory of Gravity in the context of thermodynamics, and for his work on the large scale structure in cosmology.

Tackling the origins of the universe

Astronomy, which began as a study of heavens, has over time become our greatest laboratory to study and understand basic physics. It is now generally believed that the universe had an explosive beginning. Over time, small perturbations in density of matter and energy, amplified by the attractive force of gravity, led to the development of increasing concentrations of matter, which gradually became galaxies. Particle physics, quantum mechanics, the physics of gravity and the combination of the two (quantum gravity) are essential to understanding the origins of our universe. Separately, thanks to astronomical observations, it is now believed that most of the matter is “dark” (not ordinary matter) and that space is permeated by an unknown energy (dark energy).

Finally, we have black holes which began as mathematical oddities in the Theory of Gravity but are now confirmed by observations. It is widely believed that progress in theories of gravity (a fore-front area in physics) is intimately tied to understanding black holes and cosmology.

Padmanabhan is a theoretical astrophysicist who has worked in three areas: developing deeper understanding of gravity, contributing to the interpretation of data which firmed up the evidence for dark energy and understanding the physics of the growth of large scale structure in our universe.

Professor T. Padmanabhan, Distinguished Professor and Dean at IUCAA, Pune, is internationally renowned for his research contributions to the subjects of gravitation and cosmology. He has provided a clear interpretation of gravity as an emergent phenomenon. This approach, which has far-reaching implications for quantum gravity, provides a possible understanding of the nature of dark energy and has won prizes six times in recent years from the Gravity Research Foundation, USA.

Padmanabhan is currently the Chairman of the Astrophysics Commission of the International Union of Pure and Applied Physics. He was the President of the Cosmology Commission of the International Astronomical Union, and a Sackler Distinguished Astronomer of the Institute of Astronomy, Cambridge. He is an elected Fellow of all the three Science Academies of India as well as of the Third World Academy of Sciences (TWAS).

He has received numerous national and international awards, including the TWAS Prize in Physics, the inaugural Infosys Prize in Physical Sciences, the Al-Khwarizmi International Award, the Miegunah Award from the University of Melbourne, the Millennium Medal, and the Shanti Swarup Bhatnagar Award.

In recognition of his achievements, the President of India awarded him the Padma Shri, the fourth highest civilian honor in India, in 2007.

Spends a year at Institute of Astronomy, Cambridge

Conferred the Padma Shri by the President of India

Wins the The World Academy of Sciences (TWAS) Prize in Physics

Professor Padmanabhan has distinguished himself with fundamental contributions to several areas of theoretical astrophysics. Through a series of papers, Padmanabhan has shown that the link between Einstein’s Theory of General Relativity and thermodynamics is far deeper than suggested by the early work done in the seventies. This work opens a way of selecting gravity theories in higher dimensions and is expected to provide fresh impetus and light to this field. Padmanabhan's approach is widely considered to be innovative and beautiful.

Padmanabhan has also made highly perceptive and critical contributions to our present understanding of the data on high redshift supernovae. Additionally, his interpretation of the cosmological constant and dark energy has had a significant impact on the overall work in this field. Padmanabhan has also written several highly successful graduate level textbooks in astrophysics as well as popular books aimed at explaining astrophysics and cosmology to the lay public.