The Infosys Prize 2017 in Life Sciences is awarded to Prof. Upinder Singh Bhalla for his pioneering contributions to the understanding of the brain’s computational machinery. His investigations have revealed essential neuronal computations that underlie the ability to acquire, integrate and store complex sensory information, and to utilize that information for decision and action.

Prof. Upinder Bhalla is an exceptionally talented neurobiologist who has made transformative discoveries regarding the brain’s computational machinery for acquisition, storage and use of sensory information. Utilizing the mammalian olfactory system as a model for study, Bhalla has employed richly interwoven theoretical and experimental approaches to understand a range of computational problems extending from sensory signal acquisition, integration and storage to behavioral control and decision-making. The strength of his research program lies in its unprecedented naturalistic treatment of sensory signals as varying continuously in time, intensity and location with respect to the observer.

Through pioneering studies of this complex temporal integration process, Bhalla made the extraordinary discovery that responses of neurons in the olfactory bulb reflect a linear sum of time varying inputs from individual or mixed odorants. Bhalla discovered further that this integrative process for identifying individual odorants in mixtures is enhanced by the temporal structure of the natural respiration cycle, a process known as “phase coding.”

Bhalla also found that odorant tracking – a fundamentally important skill for survival in a world of spatiotemporally varying food sources, predators and mates – is mediated by a “stereo” odor detection system in which olfactory neurons are delicately tuned to the relative strengths of odorant signals in the two nostrils.

The control of airborne odorant molecules in space and time, as required to accomplish these experiments, is notoriously difficult. Bhalla’s success is a testament to his experimental rigor and quantitative sophistication. His discoveries suggest computational principles for neural circuits that have broad relevance for understanding brain function in natural environments.

Prof. Upinder Bhalla is currently Professor and Dean, at National center of biological Sciences (NCBS), Bengaluru. He received his undergraduate degree in natural sciences at IIT-Kanpur and Cambridge University, UK.

He carried out his graduate work at California Institute of Technology, working in the area of information processing in the mammalian olfactory bulb. He received his PhD in 1993. Following a short post-doctoral training at Mount Sinai School of Medicine, New York, he joined the faculty at NCBS in 1996.

Bhalla is winner of Shanti Swarup Bhatnagar Prize (2007), and was elected fellow of the Indian Academy of Sciences (2007) and the Indian National Science Academy (2010). He is the winner of Millenium Medal of Indian Science Congress (2000).

Prof. Bhalla has mentored a large number of graduate students, has fostered many international scientific collaborations and organized national and international conferences.

Wins the Shanti Swarup Bhatnagar Prize; and elected fellow of the Indian Academy of Sciences

Prof. Bhalla has worked in a relatively uncharted domain of inquiry that joins computational neuroscience, systems neuroscience, and systems biology. His central question is how the brain achieves its function through computation. Throughout his career he has combined experimental and computational research, and has utilized a truly interdisciplinary set of approaches.

Bhalla’s scholarly and sophisticated blend of modeling and experimentation has enabled him to tackle the difficult computational problem of sensory processing in a complex naturalistic environment in which multiple stimuli vary in location, intensity and time, and with respect to ongoing behavior.

Using the olfactory system as a model for this analysis, Bhalla has examined the responses of individual neurons and neural circuits. From these neuronal response profiles, he has developed computational and biophysically detailed models that elucidate fundamental mechanisms that underlie sensory identification, memory and behavioral choice. These models suggest general principles of neuronal computation that pave the way toward fuller understanding of the brain’s many sensory and cognitive functions. 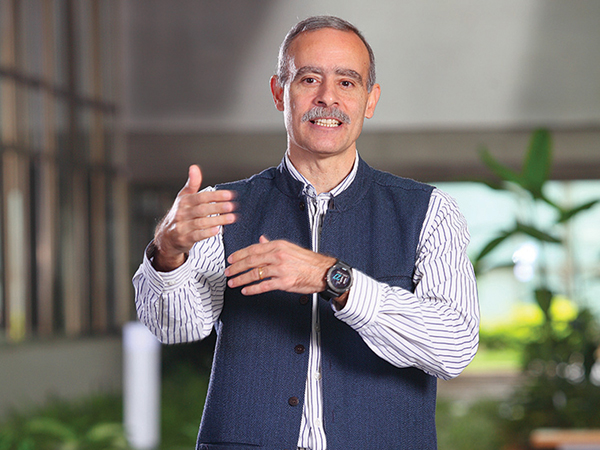 “I congratulate Upinder Bhalla for the excellent work he has been doing for the last two decades which is now not only nationally but internationally recognized as one of the fundamental ways of how we study the role of olfaction in behavior.”