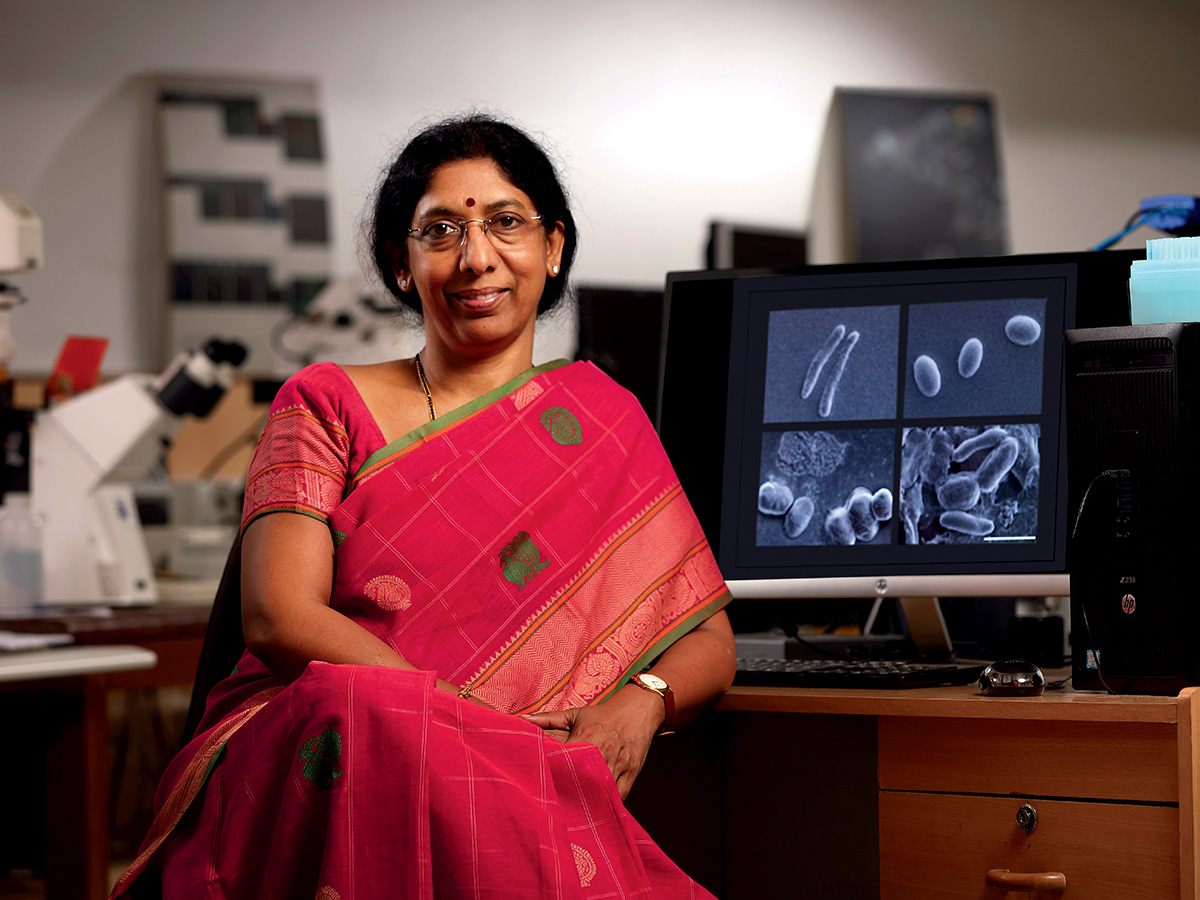 The Infosys Prize 2019 in Life Sciences is awarded to Dr. Manjula Reddy for her groundbreaking discoveries concerning the structure of cell walls in bacteria. Through elegant genetic and biochemical analyses, Dr. Reddy and her colleagues have revealed critical steps of cell wall growth that are not only fundamental for understanding bacterial biology but also have important implications for developing new classes of antibiotics.

Infographic: The War On Superbugs

The discoveries of Dr. Manjula Reddy have changed the arc of microbiology and raised the hope of new classes of antibiotics to counter microbes that are antibiotic resistant. Dr. Reddy and her colleagues have elucidated key steps in how bacterial cells physically grow. Why does this matter? A single cell of a bacterial pathogen can grow in a food-filled environment and at normal human body temperature in as little as 20 minutes, by remodeling its membrane and cell wall. Despite over 100 years of research into bacteria, how a single cell achieves this rapid body-remodeling is not fully understood. Dr. Reddy’s work has provided critical new insights.

Widespread use of penicillin has led to antibiotic-resistant bacteria. Current antibiotics target a finite set of functions, such as ribosomes for protein synthesis, DNA replication, and cell wall synthesis – which primarily refers to the final steps of wall formation, when each peptide forms a covalent linkage to its neighbor. This linkage step, and particularly the enzyme that forms the linkage, is the target of beta-lactam antibiotics like penicillin.

Dr. Reddy took the bold step of pursuing a different target, namely the first steps of cell growth involving cleavage of the existing peptide-peptide bond. Because bacterial cells are surrounded by a continuous meshwork of cell wall, their growth and division is intimately tied to the expansion and splitting of the wall matrix. It was appreciated early on that bonds in the meshwork would need to be broken in order to make space for the insertion of new material to grow the wall. This realization predicted that cell wall enzymes that cleave the wall would be essential for bacterial growth. However, the identity of these enzymes remained mysterious for decades. Dr. Reddy was the first to identify them using an elegant combination of biochemistry and genetics.

Reddy went on to discover that one of the ‘spacemaker’ enzymes is regulated by a protease and an adapter that targets the enzyme to the protease, which is likely the first example of a broadly utilized mechanism for regulating enzymes at the cell surface. She has reported multiple enzymes that cleave the bacterial cell wall. Loss of these endopeptidases results in structural instability; the cell explodes. These cell wall enzymes are conserved in many bacteria that cause disease.

The race between antimicrobial compounds and bacterial resistance is a dialectic perhaps as old as the first communities of cells. Antibiotic usage leads to death of vulnerable bacteria and other microorganisms, leaving the resistant organisms to multiply. By examining a long-standing problem with a novel and even orthogonal perspective, Dr. Reddy and colleagues have revealed fundamental aspects of bacterial growth and identified new targets - the proteins and the reaction steps - for new classes of antibiotics.

Dr. Manjula Reddy is Chief Scientist at the Centre for Cellular and Molecular Biology (CCMB), Hyderabad. She received her Ph.D. in 2002 from CCMB and did a postdoctoral fellowship at the Fred Hutchinson Cancer Research Center, Seattle. She was appointed as scientist at CCMB in 2002, and as Independent Investigator in 2007.

Dr. Reddy is a member of the Telengana Academy of Sciences and the Guha Research Conference. She serves on the editorial board of the Journal of Bacteriology.

Sets up lab at CCMB

The Infosys Prize 2019 in Life Sciences is awarded to Dr. Manjula Reddy for her groundbreaking discoveries concerning the structure and growth of cell walls in bacteria. Understanding fundamental mechanisms of bacterial growth is critical for developing new classes of antibiotics. Because bacterial cells are surrounded by a continuous meshwork of cell wall, their growth and division is intimately tied to the expansion and splitting of the wall matrix - bonds in the meshwork would need to be broken in order to make space for the insertion of new material to grow the wall.

“I congratulate Dr. Manjula Reddy for being the winner of the 2019 Infosys Prize in Life Sciences. Your work on the development and growth of cell wall in bacteria has transformed the field. Your elegant experiments describing the first stages of cell growth are likely to lead to new antibiotics and address the growing concern about antibiotic resistant bacteria. On behalf of the jury for Life Sciences I warmly congratulate you on being this year's award winner.”