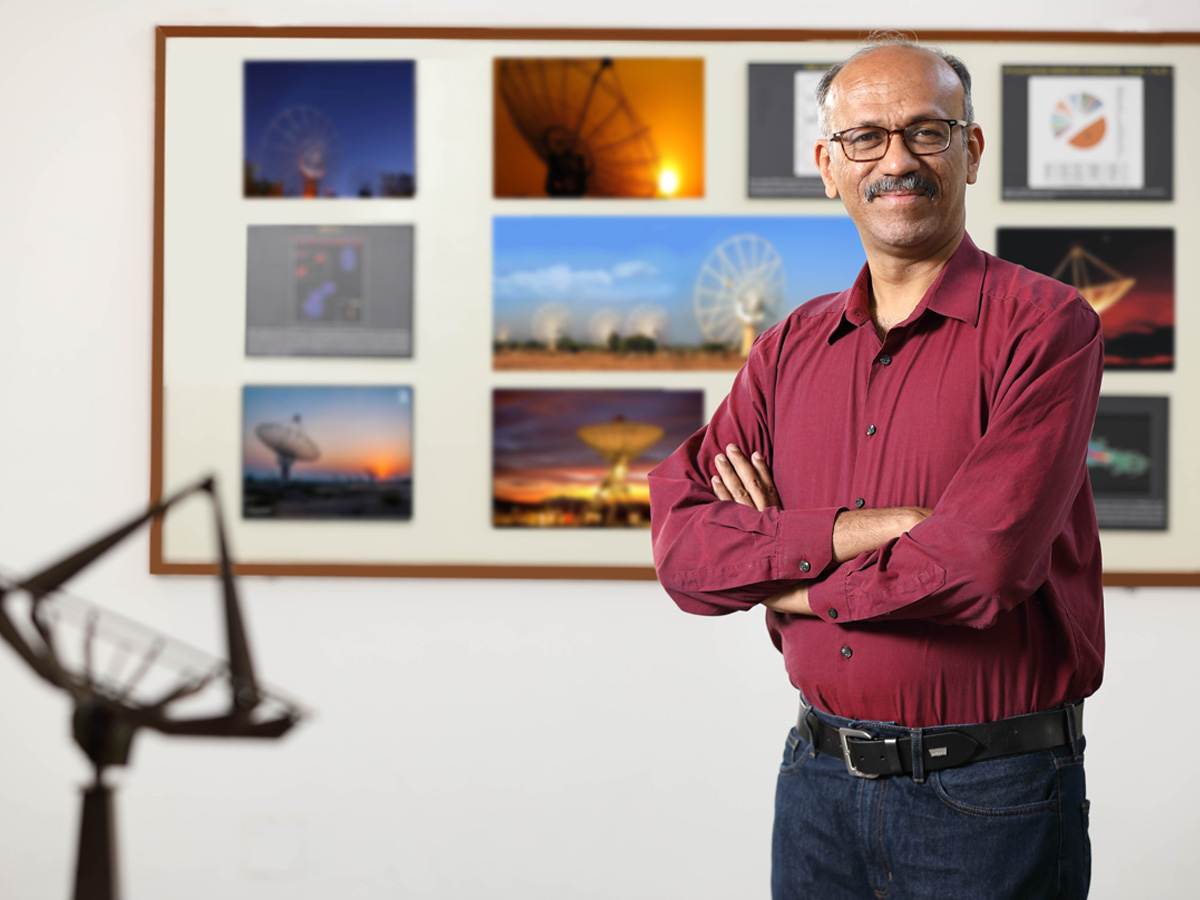 The Infosys Prize 2022 in Physical Sciences is awarded to Prof. Nissim Kanekar for his study of galaxies in an era, the so-called “high noon” period, in which stars were being formed at a maximum rate. Separately, his careful astronomical investigations have placed the strongest limit on possible secular variation of the fine structure constant and the electron-to-proton mass ratio.

Prof. Nissim Kanekar is an observational radio astronomer and best known, thanks to his deep understanding of methodologies, for his ability to make delicate but definitive measurements. The Infosys Prize 2022 in Physical Sciences is given for his pioneering detection of atomic hydrogen at cosmological distances and for constraining possible temporal evolution of two fundamental constants of physics.

Following the Big Bang, the universe was filled rather uniformly with hydrogen and helium. However, at the present time, the universe consists of concentrations of stars (a.k.a. galaxies). How the universe went from a gas-rich universe to one with galaxies is, not surprisingly, a frontier topic in astronomy. This question motivated the Giant Metrewave Radio Telescope in India and is the basis for the James Webb Space Telescope and the Square Kilometer Array.

Stars are born out of the gas, and galaxies which are collections of stars, are held together by the gravity of matter. Working with colleagues Aditya Chowdhury and Prof. Jayaram Chengalur, Prof. Kanekar detected atomic hydrogen at a red shift of 1.3, corresponding to a look back in time of eight billion years. In this epoch gas appears to be converted to stars at a furious rate. The depletion of gas in turn reduces star formation and thus, neatly explains the dominance of stars over gas in our own galaxy at the present time. The detection was made possible by a brilliant approach which took advantage of redshifts obtained by optical astronomers and “stacking” the radio data.

Prof. Nissim Kanekar is an astronomer and professor at the National Centre for Radio Astrophysics (NCRA) of the Tata Institute of Fundamental Research in Pune. In 2000, Prof. Kanekar obtained his Ph.D. from the University of Pune working on the then newly-commissioned Giant Metrewave Radio Telescope (GMRT). He held a NOVA postdoctoral fellowship in the Netherlands, and then Jansky and Max-Planck postdoctoral fellowships in the United States. He then returned to NCRA.

Nissim Kanekar, working with a Ph.D. student, Aditya Chowdhury, and Prof. Jayaram Chengalur, focused on the detection of atomic hydrogen in the distant universe which was the primary motivator for the building of the GMRT. Kanekar’s research is characterized by a thorough understanding of GMRT, stochastic and systematic noise. It is this deep understanding that lies at the heart of this success in studies of cosmological hydrogen and constraining variation of fundamental constants. Prof. Kanekar’s recognitions include the Ramanujan and the Swarnajayanti Fellowships received in 2009 and 2015 respectively.

The Infosys Prize 2022 in Physical Sciences is awarded to Prof. Nissim Kanekar for his investigations of the build-up of galaxies and observational constraints on secular variation of fundamental physical constants. The growth of galaxies since the Big Bang is a frontier problem in astronomy. Using the Giant Metrewave Radio Telescope, Prof. Kanekar and his colleagues traced the store of hydrogen gas as a function of their age. They found that eight billion years ago galaxies had more gas relative to stars. Copious star formation led to a rapid decrease of the hydrogen store. This finding nicely explains why present-day galaxies are dominated by stars.

Separately, Kanekar, via radio astronomical observations, has placed the strongest limit on possible secular time variation of the fine structure constant and the electron-to-proton mass ratio. In both cases, the signals are weak and it is Prof. Nissim Kanekar’s deep understanding of radio astronomical telescopes and methodology that were key to the success of his research programs.

“The detection of atomic hydrogen at “cosmic noon” is a landmark finding and a tribute to your exacting work and persistence, the GMRT and its architect, Govind Swarup. Your limits on invariance of fundamental constants stand high. We have recognized these two achievements with the Infosys Prize. Congratulations Nissim Kanekar!”