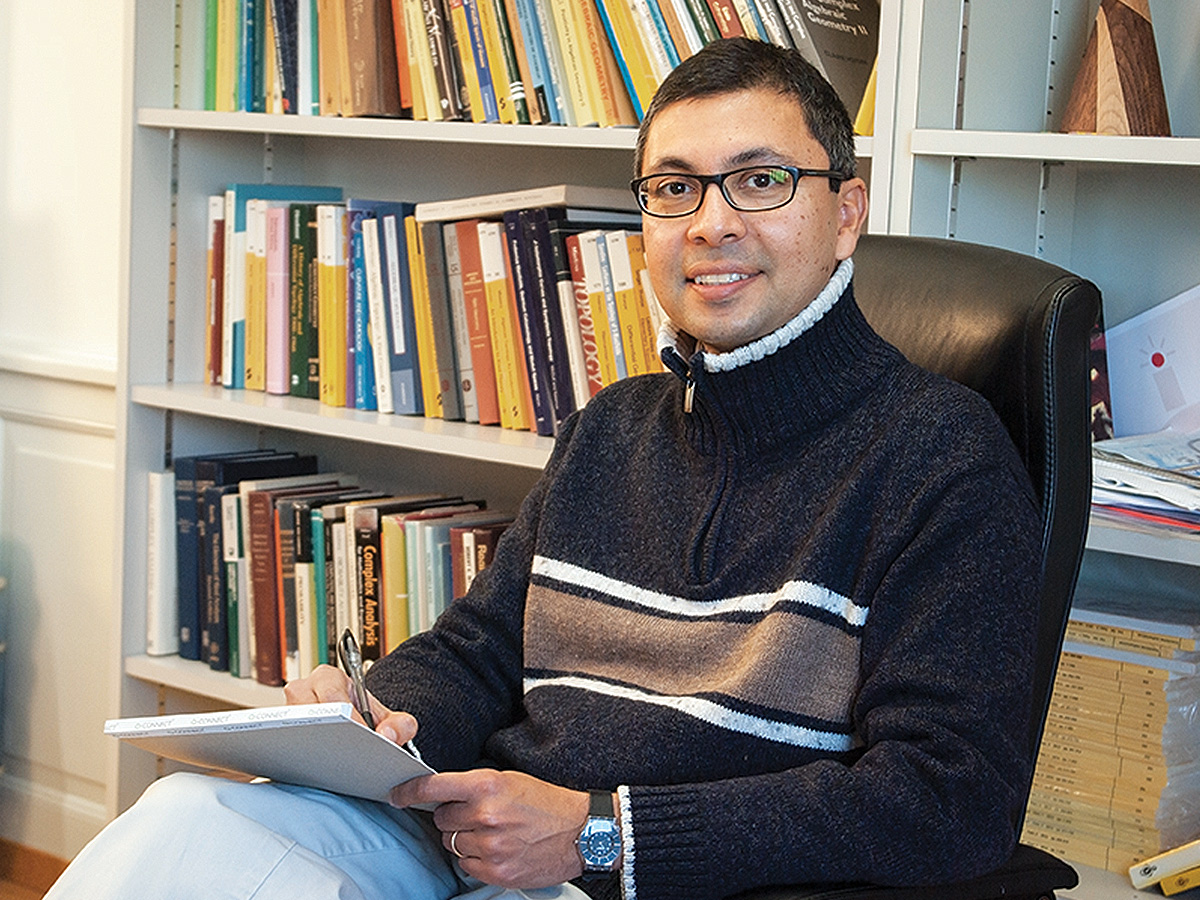 The Infosys Prize 2013 in Mathematical Sciences is awarded to Prof. Rahul Vijay Pandharipande for his profound work in algebraic geometry. In particular, for his work on Gromov-Witten theory for Riemann surfaces, for predicting the connection between Gromov-Witten and Donaldson‑Thomas theories, and for his recent work with Aaron Pixton that establishes this connection for Calabi-Yau 3-folds.

Uncovering The Relationships Between Invariants

Algebraic geometry occupies a central place in modern mathematics and has multiple conceptual connections with such diverse fields as complex analysis, topology and number theory. Initially, a study of systems of polynomial equations in several variables — the subject of algebraic geometry which starts where equation solving leaves off — becomes more important to understand the intrinsic properties of the totality of solutions of a system of equations, rather than to find a specific solution. This leads to some of the deepest areas in all of mathematics, both conceptually and in terms of technique.

For the last 15 years, Prof. Rahul Vijay Pandharipande has been a dominant force in this area for which he has also received the Clay Research Award in 2013. One of his first major achievements was a complete solution of Gromov-Witten theory of Riemann surfaces (in 2000, jointly with Andrei Okounkov). More precisely, they proved two famous conjectures, the 2-Toda conjecture for Gromov-Witten theory of P1 and the Virasoro conjecture for general Riemann surfaces.

Another major contribution was his work with Davesh Maulik, Nikita Nekrasov, and Andrei Okounkov, in which they conjectured a totally unexpected relationship (now known as the MNOP conjectures) between Gromov-Witten theory and the Donaldson-Thomas theory of algebraic 3-folds. In a recent joint work with Aaron Pixton, Prof. Pandharipande has proved this conjecture for a very large class of 3-folds. This monumental result had a great impact on the disciplines of mathematics and physics.

Prof. Rahul Vijay Pandharipande got his A.B. degree from Princeton University in 1990 and earned his Ph.D. in Mathematics 1994 with Joe Harris from Harvard University. After spending four years at the University of Chicago, he moved to the California Institute of Technology, where he stayed till 2001. He joined Princeton University as a professor in 2002. He then moved to Europe in 2011, visiting Portugal for a year and then settling at ETH in Zurich.

He has received many academic honors including Fellowships from the Sloan Foundation (1999) and the Packard Foundation (2000), the Compositio Prize (2009) and the Clay Research Award (2013). He was an invited speaker at the International Congress of Mathematicians (2002).

Invited to speak at the International Congress of Mathematicians; and appointed Professor of Mathematics at Princeton University

Wins the Clay Research Award; and the Infosys Prize in Mathematical Sciences

Prof. Rahul Vijay Pandharipande is a leader in the field of algebraic geometry. During the last 15 years he has made profound contributions to Gromov‑Witten theory. This theory introduced in the 1990s has forged deep connections between many areas of mathematics including algebraic geometry, symplectic geometry, representation theory, etc. He excels in doing explicit computations and in finding beautiful formulae and rich structures within these theories.

In order to carry out these calculations, he has also been led to make many theoretical advances that are not computational in nature. In 2000, with Andrei Okounkov, he provided a complete account of Gromov-Witten theory for Riemann surfaces and together with Davesh Maulik and Nikita Nekrasov they went on to formulate what is known as MNOP conjecture that provides a crucial link to Donaldson‑Thomas theory. Prof. Pandharipande and his student, Aaron Pixton recently proved this conjecture for a large class of Calabi-Yau 3-folds.

"I want to congratulate Prof. Rahul Pandharipande on being selected as the recipient of the Infosys Prize for this year. For the last 15 years he has been at the forefront of some of the important research done in the field of algebraic geometry. His area which connects algebra, number theory and geometry is the central part of modern mathematics and Rahul has been one of the leaders in the field. I am pleased that the jury unanimously chose him for the award this year.”